REVEALING THE ARK OF THE COVENANT: DIGITIZING THE MUSEUM EXPERIENCE

At the end of Indiana Jones and the Raiders of the Lost Ark, the titular character questions the government on where is and what they’re doing to the fabled Ark of the Covenant he’s just retrieved from the Nazis, he’s rebuffed with it’s being analyzed by “top men.” Instead, the audience is shown that the Ark is put in a brown box labeled TOP SECRET and put in a warehouse filled with similar brown boxes. In place of being utilized or analyzed for better or for worse outcomes, it’s become a piece of hay in a haystack kept away from everyone. Of course, the Ark has terrible powers (being able to melt off peoples’ faces among other things) but it also has a deep historical and scientific significance that should really be looked at by these top men.

Museums and other institutions run aground of this fallacy as well, albeit not because of a government conspiracy. Their artifacts are displayed, but in frequently controlled and limited environments. They’re stored in glass boxes or kept from close inspection by alarms as articles for people to only look at, offering an increasingly non-interactive experience for learning. Of course, this is understandable: these artifacts are often one-of-a-kind, expensive, and fragile; but it still doesn’t help in creating a participatory experience any more than locking it in a box away from prying eyes. And even if these limits didn’t exist, there are only set ways they can be experienced due to the laws of reality. Additionally, the mediums these artifacts are conveyed through are designed to facilitate one-way communication from the artist to the viewer. And thirdly, museums only have a limited amount of physical space to display their collections, the rest is stored away like the Ark, maybe coming out for special exhibits or as part of a rotation. Lastly, regardless of if they’re displayed or not, the only way to view these pieces is by physically visiting the museum in person.

But digital displays have none of these limitations. Gone are the walls limiting patrons from experiencing the museum and its charges, instead they’re able to explore on their phone, computer, and other devices from anywhere regardless of their physical proximity to the museum’s in-person location. They’re able to reconnoiter in the traditional context already offered in the past, but also in new and more interactive ways. And while they’re doing that, there’s no need to worry about the fragility of a picture or a 3D model like the way the original has to be treated. There’s also no need to worry about limited space for physical representation in cyberspace as everything can be displayed as long as the servers and hosting sites are available. An example of this is when the Smithsonian created a Virtual Reality experience for Francis Glessner Lee’s forensic science training dioramas which in real life were the size of a dollhouse room and delicate. (Snyder, 2018). They thusly used technology to create an experience that enhanced the museum’s artifacts for use well beyond viewing diorama’s in a glass case. 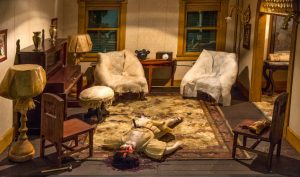 Consider viewing this scene like above, a static picture with a zoom lens, or like below, looking at a diorama from the outside. 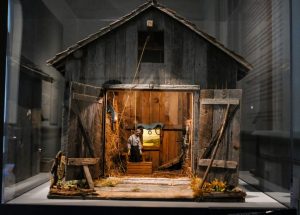 They convey the necessary information (and the ghoulishness of it all), but through 360 VR captures (found here) the viewer can be placed in the middle of these doll murders that were used to train forensic investigators in the 40s and 50s. Perhaps, through this 360 VR capture her work can train this generation’s forensic professionals as well.

In fact, the Smithsonian has released millions of their digital assets, both 2D and 3D to world free of charge. This offering allows people to not just learn through viewing the items, but also create their own experiences that educate themselves and their respective audiences.

Imagine a teacher using the Smithsonian’s assets to enhance a lesson for their students, from using a picture, a moveable 3D model, or an asset in a VR space. Or imagine a student using them to create their own works of art. Instead of being limited by having to travel to Washington DC to view these works behind glass cases, they can truly interact with the museum’s artifacts in new mediums and contexts.

Another example for the benefits of museum’s digitization their assets and experiences using technology to reach, educate, and inspire their audiences is through Virtual Reality applications. VR is still in its early stages commercially, but it is becoming more and more accessible, with headsets like the Oculus Quest 2 costing $300 without relying on a tethered PC. 360 immersive environments can be viewed on a phone through its gyroscopes, but with VR it can create the feeling of actual integration of the viewer and what they’re viewing. Add the ability for users to interact with objects (grabbing them, picking them up, etc) and it creates an experience that’s akin to reality or at least a video game.

In Anne Frank House VR, users can actually pull out the bookcase hiding the door to enter and explore the the Frank family’s secret annex they used to hide from the Nazis. The medium allows for an experience that mimics actually standing in the real Anne Frank House while also allowing for user input towards progression. There’s prompts, a button to press or a thing to pickup, to advance the story of the game, but the user has the agency of when to proceed with them. And when they do proceed, they’re greeted with information (mainly quote’s from Anne Frank’s diary) tying the user’s interactivity to their learning experience. This experience also allows for the creation of an empathic connection between the viewer and Anne Frank by experiencing the same spaces she inhabited while hearing her inner most thoughts from the diary.

Another example is the Smithsonian’s Beyond the Wall application, where user’s can interact with the art in a digital space free from the confines of real museums while also approximating that same real experience. They can approach the pieces akin to as if they were actually at the real Smithsonian, but also go beyond. For example, they can view the bronze cast of the Adams Memorial in the virtual museum but also get transported to the gravesite where the original one is located. Or they can look at Frederic Edwin Church’s Aurora Borealis and, by prompt, compare it with a real 360 video of the painting’s subject matter in Iceland. 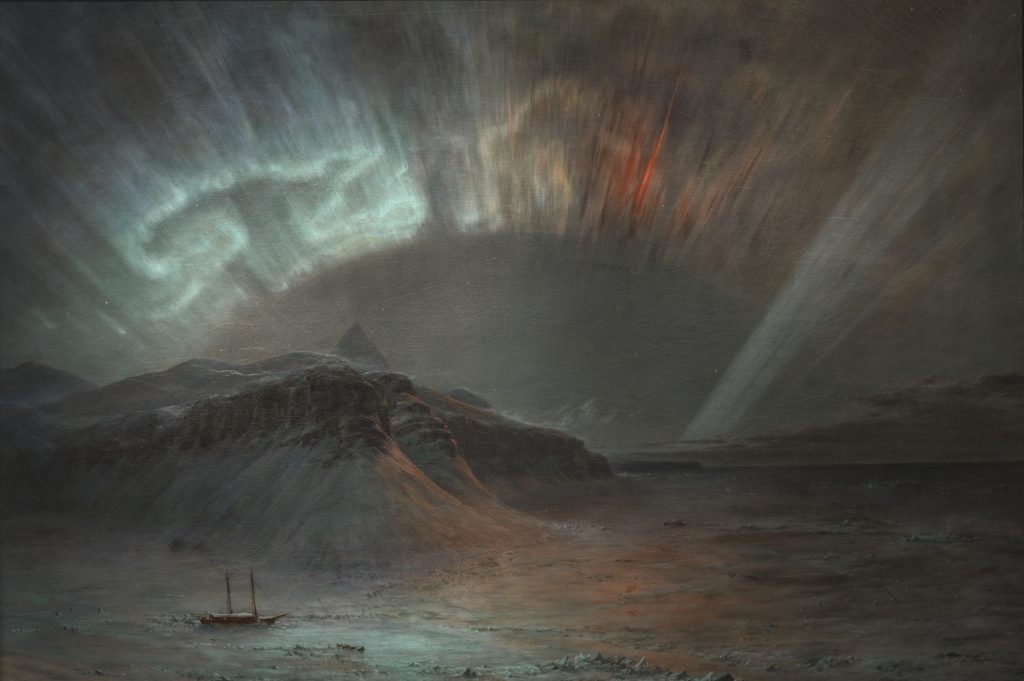 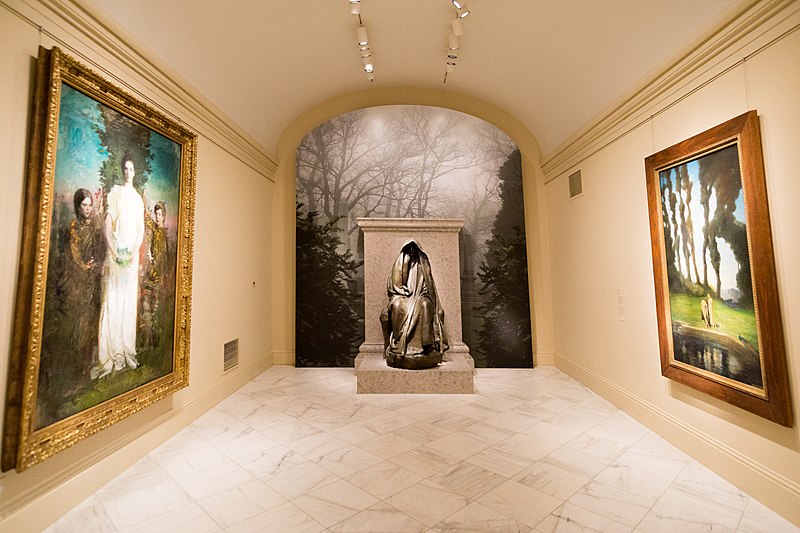 The Adams Memorial bronze cast at the Smitsonian 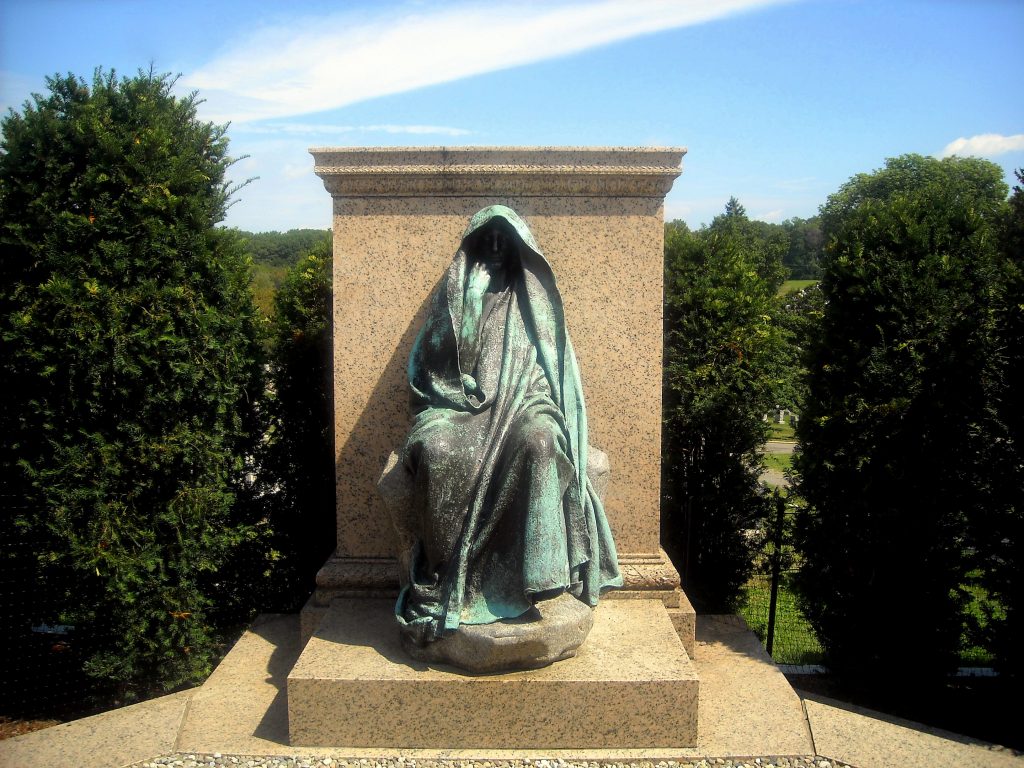 By using technology to digitize these museums into Virtual Reality, they’re able to create a much more immersive and interactive experience that creates a facsimile of the real experience while not being bound by the law’s of reality.

The COVID-19 Pandemic has accelerated and laid bare countless changes and challenges that are happening to society. One of these is that we’re moving towards relying more and more on interacting, creating, and learning through a digital lens. With the loss of physical realm, we’ve relied on technology to see the world just as someone with vision issues relies on glasses In recent years with the advent of Virtual Reality and Augmented Reality headsets, this comparison has become even more 1:1. By utilizing technology in mueseum’s to digitize their experiences and collections, we can remove the Ark of the Covenant from its box and, instead of melting faces, inspire people across the world in new, more interactive and participatory ways.

About the author of Digitizing the Museum Experience

Michael Charney is currently undertaking a Master’s Degree in Library & Information Science with a focus on digital services and emerging technologies. He lives in Napa, California with his Labrador Retriever Ivy discovering the societal benefits of technology and serving as an educational ferryman between the physical and digital worlds to allow both to prosper.

Michael has a BA in Film Studies from the University of California at Davis and enjoys delving into the mediums of film, books, video games, and virtual reality in an effort to find their communal benefits and because they’re fun ways to tell and receive stories.